2021 marked a special Anniversary for our wonderful venue which originally opened as a cinema called The Ritz in 1936.

Let's take a look back through the years at how our venue has played it's role in the history of Horsham's entertainment. 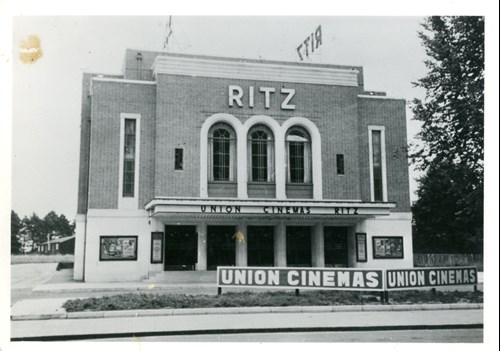 Built by Hall Beddall & Co Ltd of Crawley & London, The Ritz cinema opened on 13 June 1936 and was owned and operated by the chain, Union Cinemas.

The building company prided themselves on using local labour and materials wherever possible and construction was completed in a remarkable six months from their first visit to site. This beat Horsham’s Odeon Cinema, situated closer to The Carfax, which opened four months later. The exterior of the building was carefully designed to harmonise with the surroundings in the town.  The walls were faced with local hand-made bricks and stone.  The main façade with its row of entrance doors with deeply recessed arched windows over them was considered a development of Georgian tradition for a new purpose.

Internally the decorative colour scheme was based on autumnal tints in which rich browns, reds and gold predominated, providing a pleasant warm feeling.  The illumination was designed as an important part of the decorative scheme with the auditorium lighted by concealed lighting in the ceiling giving a pleasant soft and even glow of light throughout the theatre.

The building was built for cinema use only with no stage facilities and had a capacity of 1086 people on two levels, stalls and one circle.

One of the most interesting features of The Ritz was a Compton Theatre organ with a Melotone unit, two keyboards and four rows of pipes (known as ranks) supplied by The John Compton Organ Co Ltd in North Acton, London.

Some of the beautiful art-deco style decorative plaster features were supplied by James Walker (Architectural Decorations) Ltd from London W10 and decorative light fittings manufactured and supplied by F J Pride, The Cinema Lighting Specialist from Clapham. The theatre was equipped with a Western Electric Sound System.

Films ran Mondays to Saturdays from 2pm until 11pm and on Sundays from 8pm until 10pm.

We understand the opening ceremony ran as follows:

A curtain rise revealed a silver glittery sign with a single word "Greetings" whilst The Bach Trumpeters of The Royal Military School of Music played a fanfare.

Major RCG Middleton, a local gentleman and employee of the Union Cinema Co who at that time owned The “old” Capitol Theatre, The Carfax, Winter Garden as well as The Ritz presided over the ceremony with a few words: “I am the man responsible for your cinema entertainment in Horsham for the last twelve years”

Forthcoming attractions at The Ritz were highlighted and the main feature film was “When Knights Were Bold” starring Jack Buchanan and Fay Wray. 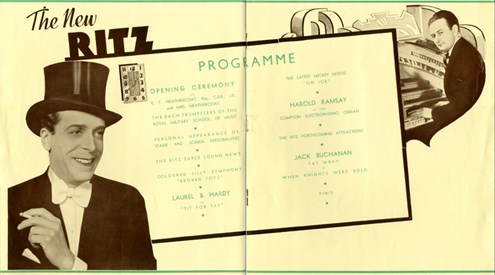 Union Cinemas ran into financial crisis and fell under the control of Associated British Cinemas (ABC) in October 1937 but the cinema retained its name as The Ritz.

In the 1940s, ABC set up the first major Saturday cinema club for children, "The ABC Minors". At the beginning of each Saturday morning session, the "ABC Minors Song" would be played to the tune of 'Blaze Away' by Abe Holzmann whilst the lyrics were presented on the screen with a bouncing red ball above the words to help the audience keep the place.

On 20th February 1967, The Ritz was re-named The ABC during a two week run of My Fair Lady to give a clearer brand image.

In the 1970s due to a decline in attendance, the cinema was added to ABC's list for disposal. Horsham District Council acquired the site in January 1982 and ran it as a cinema until November 1983.

Horsham District Council planned to upgrade the building to provide a multi-arts venue with a theatre for the town, replacing the former 1923 Capitol Theatre, originally situated originally in London Road (and later in Medwin Walk), which was to be demolished in 1983 for the construction of a Marks & Spencer store on the site. 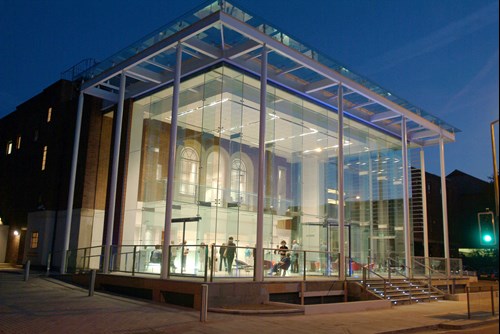 In January 2002 work commenced on a £6 million refurbishment and this marked the beginning of a most ambitious and impressive change to the town’s key entertainment centre.

This work involved a new glass atrium being constructed to the front of the building which housed a new box office and cafe on the ground floor and a new cinema and art gallery above. At the same time the cinema on the ground floor was refurbished and a new bar added. To the side of the theatre a new 100 seat Studio theatre was constructed, along with new dressing rooms and a plant room and a new scene dock was constructed. The theatre's main auditorium was also completely refurbished at this time with both levels re-raked and re-seated.

Re-named as The Capitol, in homage to the old Capitol Theatre (following a public vote on a name organised by the West Sussex County Times) doors opened in September 2003 and it was officially opened by HRH Queen Elizabeth II on 24 October 2003. 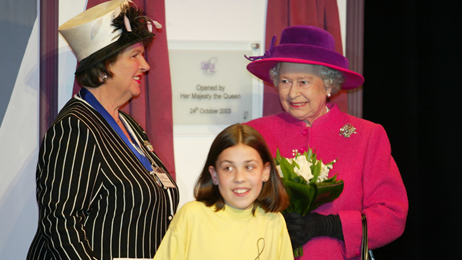 Today our venue provides a 410 seat theatre, 100 seat studio theatre, 2 cinemas, gallery space and stylish lounge bar and we are the only operating theatre & cinema in the UK to be called 'The Capitol'.

On 17 March 2020 The Capitol was forced to close following the Government’s first national Lockdown in a bid to stop the spread of the Covid19 pandemic.

With only cinemas permitted to re-open in July, the venue re-opened on 17 July 2020.  Many newly released films were postponed due to the pandemic so classic films were screened on the 12m theatre screen and two cinema screens with socially distanced seating and special hygiene measures put in place to ensure customers safety.

Several dedicated members of staff worked tirelessly to refresh the venue during the few weeks before re-opening in July.

The first live show since Lockdown 1 took place on 2 October 2020 and several more socially distanced shows were staged until Government imposed a second lockdown from 5 November until 2 December 2020. Although the pantomime could not be staged, two hugely popular socially distanced Christmas shows went ahead.

A third closure for entertainment venues was imposed from Boxing Day 2020 and the venue finally re-opened on Friday 28 May 2021.

Thanks to The West Sussex County Times, Maureen Powell-Davies ,Toby Phillips Photography and David Fuller for use of their wonderful photographs.